Harnessing Quiet Conflict and Reviews – Samaritan, Dynazty, Muse, and The Rings of Power

How to Harness the Power of Quiet Conflict by Angela Ackerman

We know that smaller conflicts layered together can sometimes have the biggest impact: misplaced car keys can cause a character to be late picking a child up from preschool, which leads to a stern warning from the teacher, judgement from other parents, and possibly even a fine. Now the character is in a bad mood and as she turns into the driveway, she misses seeing the cyclist on the sidewalk, and just like that, a whole new set of problems start.

Subtle conflict can also play a big role in the story. History is filled with powerful moments of quiet resistance—ordinary people who spied during a war, hid Jewish people from the Nazis, or sewed hidden messages into clothing to draw attention to unfair working conditions in second-and third-world countries.

When you need conflict that’s subdued yet satisfying, give these a try:

Subversion. Have a character use persuasion or manipulation to "turn" people inside a rival or enemy’s inner circle.

Collusion. A character pursuing a goal that will disrupt the status quo and make enemies of powerful people—what can be better than that? Adding someone else who is like-minded, of course. Two characters, maybe even rivals, joining forces to conspire against an influential person or agency is the ultimate rebellion.

Interference. Quiet conflict can always come in the form of disruptions and obstructions, such as an unforeseen delay, bureaucracy slowing things down, losing a resource, an opponent purposefully passing along wrong information, or someone causing small problems to hinder the character's agenda.

Informing. No one likes having their private matters made public—often because it causes a loss of leverage. This is why information being leaked to the character's competitor or enemy can be so detrimental. Not only could this sabotage a character’s goals, having an informant in their camp will cause them to view everyone around them with suspicion, creating deeply embedded trust issues.

Influencing. Influencers, by nature, win trust and favor and use their position to persuade others. A benevolent influencer can help a character make better decisions, but a malevolent one could use their resources to derail the character’s confidence, make them dependent, and lead them to choices and actions that will weaken them in the long run.

Intimidation. This is the big bad brother of influencing—the threat of violence or unpleasant consequences being used to pressure a character into making certain decisions. Intimidation can come in the form of a physical attack, someone's unwanted presence, or even a meaningful look. It can be mental, too, especially if the person doing the intimidating has information that can be leveraged if their target doesn’t fall in line.

Have you ever used these in your story? Let me know in the comments! 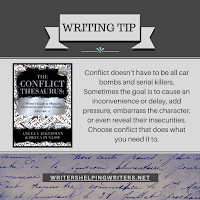 If you need more ideas for story conflict, check out The Conflict Thesaurus: A Writer’s Guide to Obstacles, Adversaries, and Inner Struggles (Volume 1 & Volume 2).

Angela Ackerman is a writing coach, international speaker, and co-author of the bestselling book, The Emotion Thesaurus: A Writer’s Guide to Character Expression, and its many sequels. Available in ten languages, her guides are sourced by universities, recommended by agents and editors, and are used by novelists, screenwriters, and psychologists around the world.  Angela is also the co-founder of the popular site Writers Helping Writers, as well as One Stop for Writers, a portal to game-changing tools and resources that enable writers to craft powerful fiction.

Samaritan
From the IMDB: A young boy learns that a superhero who was thought to have gone missing after an epic battle twenty years ago may in fact still be around.
This is an original superhero film starring a now 76 year-old Sylvester Stallone.
It’s done well, but nothing I don’t think any of us couldn't have written.
Then, there is a twist near the end. Not quite Donnie Darko level, but it really elevates the film. 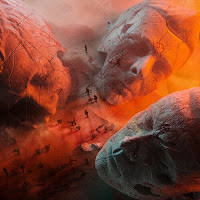 Muse – Will of the People
Every song on this British band’s album is catchy. And all over the map – pop to rock to metal. Very eclectic. But totally Muse.
It’s definitely a covid lockdown and restrictions protest album. Song titles include Compliance and We Are F*ing F*ed.
One of the best songs will surprise you – Verona. 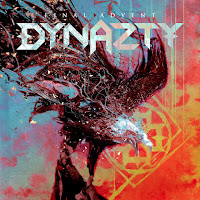 Dynazty – Final Advent
This Swedish rock band knows how to write the hits. On par with 80’s Def Leppard.
Delayed for months, it’s well worth the wait. Every song is catchy and a potential hit.
Best song – Yours. It is epic! 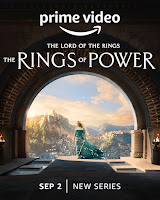 The Rings of Power
The series takes place during the second age, giving it centuries to work with.
You get a young Galadriel and Elrond and it really fleshes out their backgrounds.
Plus, it’s of the same quality as the LOTR and Hobbit movies. The special effects, pacing, and everything – just great.

Are you ready to tackle conflict now? Picked up the Conflict Thesaurus? Seen Samaritan, Rings of Power, or heard either album?

Email ThisBlogThis!Share to TwitterShare to FacebookShare to Pinterest
Labels: Harnessing Quiet Conflict; Samaritan review; Dynazty – Final Advent review; Muse – The Will of the People review; The Rings of Power review

A conflict Thesaurus? Colour me ignorant but I had no idea that there was such a thing.

Thanks for the great tips, Angela. Glad you like Rings of Power, Alex. I really want to watch it too.

I saw that twist in Samaritan coming; then I just wondered if I was right. It took a while to confirm it.

Elephant's Child, yes! Sometimes it can help to have a breakdown of different conflict scenarios so we see how each might impact a character, stretch them to grow, and complicate the story through fallout, choices, and consequences. Go conflict!

Natalie, you bet! I'm glad they helped. And Thank you, Alex, for inviting me today. I have yet to watch the Rings of Power, and it is torture, but I have weddings and a move going on, and so I'm holding off until I have proper time and space to enjoy it. :)

Great summary. These two women wrote the book--literally--on this topic.

Hi Jacqui - so glad you liked this one. I think when it comes to brainstorming conflict our brains tend to gravitate to the big, neon sign stuff, but boy can we ever add a lot of intrigue and sophistication by thinking about the 'background types' too!

These definitions are great and I never would have thought there are so many.
I wish I could see LOTR but I do t have that channel. I hate how many things just are no longer on regular TV. Now my Dancing With The Stars I on Disney plus...SOBS.
My niece, er, Mr brother's child loves Muse and they are excellent. It's been a year since she told me I was judgemental and insensitive in every conversation.it hurt a lot but I realize she has so much anger. She doesn't think so but she does. She got angry at me for calling calling her niece...which u said by accident as she considers herself binary. I disagreed with her on a couple of subjects and I know know was angry with me. Anyway, nothing nothing I can do

I watched, Samaritan a few nights ago, it's not Stallone's best, but it's still worth a watch.

Ooh, the Conflict Thesaurus sounds awesome.
I use intimidation quite a bit in my stories:)

I agree, Diane - passing along information, for the right reasons or not, can really mess up a character's plans.

Joanne, glad you liked this!

This post was a joy to read, it took a while but I had plenty of time.

I actually have the emotion thesaurus! It's very useful for me, as I am bad at conveying such things.

I've seen a couple trailers for Samaritan, but I wasn't tempted to check it out. Now it sounds a bit more interesting the way you explain it.

Intimidation is a good one, Sandra!

Verona - That's the first I've seen that video, the lyrics are amazing and reach in to that place of forbidden touch during the pandemic. Beautiful vocals with a powerful message.

I haven't used them for me but I have taught some of them to my students during writing lessons.

That's a very helpful listing of tools for incorporating conflicts into your writing.
Thank you, Angela and Alex.
Cheers.

Liz, it's done well, just not really original until near the end. Definitely worth watching.

Truedessa, it's a powerful and hypnotic song. I've been learning to play it on my guitar.

I didn't even know that a conflict thesaurus existed!
Enjoyed the music videos. Hope your week's going well.

Those are great tips. I like the Muse song.

I've got some critiques of Rings of Power, but am enjoying it overall so far!
That's a great list from Angela, and really useful for the writing project I have planned for this year's NaNo...

Thanks so much for the comments, all. I am really glad these tips are giving you some ideas. :)

I've been told all stories need conflict. Conflict makes a story interesting. Sounds like a good writer's guide every writer should invest in.

Conflict Thesaurus now thats a good one. You always need a threat to the ship in Star Trek and so it seems in life. My eyes open finally, I can see I need this book. Thanks Alex

I didn't realize the new album by Muse was out already. Thanks for pointing it out. And The Rings of Power is off to a great start.

Thanks for the introduction to The Conflict Thesaurus.

I haven't seen either of the shows or heard either album. Lots of new info for me today. :) ~Jess

I've heard mixed reviews about The Rings of Power. I may have a look at it. I may not. I'm loving me some House of the Dragon, though.

Great tips from Angela! I love rolling the tiny things into something much bigger. I have yet to watch The Rings of Power. Since I'm heading to a Ren Faire this weekend, it might be the right time to start. :D

I'm still waffling on Rings of Power... I like some parts but not all :P

The thesaurus series is one of my favorite things to recommend to writers! I bought The Emotion Thesaurus years ago and now one of my daughters-in-law (both are writers!) has them on her wish list for each birthday and Christmas.

I'm enjoying The Rings of Power immensely. They're just so well done, even when varying from canon a bit. It's nice to have something new to watch that I'm almost guaranteed to enjoy.

Thanks for the fascinating journey of conflict, Angela! I've used a few of the elements you've listed, interesting! Thank you. :)

Thanks so much for the kind words, Christina - glad you liked the post. @Lynda, THANK YOU for your recommendations - that means the world! DMS, thanks for checking out the Conflict Thesaurus :)

Alex- thanks ALWAYS for your ever so kind comments! Have a lovely day- every day! xoxo