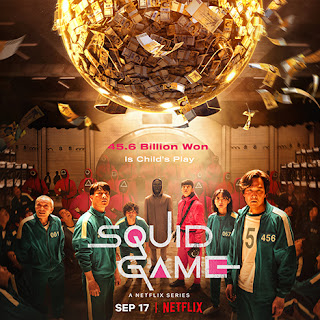 Squid Game
From the IMDB: Hundreds of cash-strapped players accept a strange invitation to compete in children's games. Inside, a tempting prize awaits with deadly high stakes. A survival game that has a whopping 45.6 billion-won prize at stake.
A South Korean series set in current time, Squid Game tells a very dystopian story.
The first season took many twists and turns I was not expecting, some of them actually pleasant.
It is very dark and extremely violent. Some of the games are tough to watch.
But what makes it engaging are the characters, especially the lead, Lee Jung-jae. They bring humanity to the cold-hearted games.
If you can handle the violence, I highly recommend it. 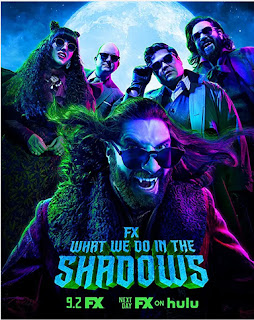 What We Do in the Shadows
From the IMDB: A look into the daily (or rather, nightly) lives of three vampires, who've lived together for over 100 years, on Staten Island.
Season three just dropped and it’s just as funny as ever.
Nadja, Laszlo, Nandor, and Colin, along with Guillermo, now promoted from servant to guardian, continue to bungle their way through situations with often hilarious results. Nandor and Nadja are now head of the Vampiric Counsel – of course taking turns and undoing each other’s work.
This might be the dumbest collection of vampires ever to hit the screen. It makes for a very silly and light-hearted show.
This series is based on the original movie and still written by creator Jemaine Clement. (He’s also an actor – look for him in the upcoming Avatar films.)
If you’ve never watched this mockumentary series, it’s a must – highly recommended! 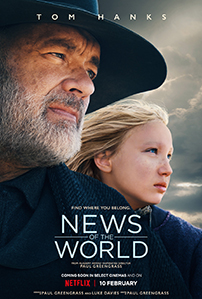 News of the World
From the IMDB: A Civil War veteran agrees to deliver a girl, taken by the Kiowa people years ago, to her aunt and uncle, against her will. They travel hundreds of miles and face grave dangers as they search for a place that either can call home.
It’s a very simple and sometimes slow-paced story. The glue is the relationship between Hanks and Zengel. Two lost souls who need each other.
There are some intense action scenes, but it’s the bond between the two that carries the film.
Recommended!


DC Fandome debuted a teaser trailer and a teaser feature of Black Adam starring Dwayne Johnson, coming out next year:

And a teaser/trailer of Aquaman and the Lost Kingdom:

Denis Villeneuve's Dune comes out in theaters October 22 – but it will release one day earlier on HBO Max!
Like all Warner Bros. releases this year, it will appear in theaters and on HBO Max simultaneously. This might hurt its theatrical release even as it pleases those who still don’t want to gather in a crowded theater.
I plan on seeing it in the theater and will probably watch it one or two more times on HBO Max. 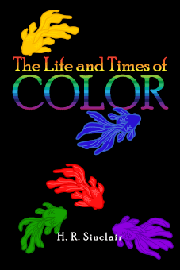 The Life and Times Of Color by HR Sinclair
This book is for people who love color, history, trivia, and superstitions. I’ve collected bits of information on color ideas around the world, added a color thesaurus, and color descriptors as well as places and things that are predominantly one color that a writer could drop into a scene if they’re looking for a pop of color. But this is not just for writers, it’s for everyone who’s fascinated with color.
Read more about the book here
Universal purchase links here 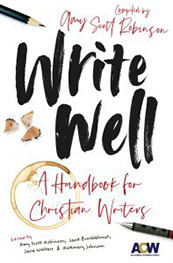 Write Well, featuring Rosemary Johnson
A handbook for Christian writers from the Association of Christian Writers.
Find it at their site

Long-time blogger friend, Katherine’s Corner, is hosting Autumn on a Tray this November 6.
Visit her site for details.

Seen either series or the movie? Looking forward to the DC movies next year? Seeing Dune in the theater? Picking up either book?
Don’t forget – October 26 is RiffTrax: Live – Amityville Horror 4, live in theaters!
See you November 3 for the IWSG post.
Almost forgot - Books Forward is featuring the IWSG today and an interview with me about the group!

Email ThisBlogThis!Share to TwitterShare to FacebookShare to Pinterest
Labels: Aquaman and the Lost Kingdom, Black Adam, Dune, HR Sinclair, News of the World, Rosemary Johnson, Squid Game review, What We Do in the Shadows 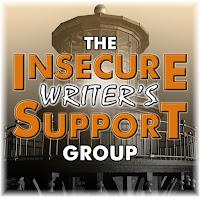 Today’s question: In your writing, where do you draw the line, with either topics or language?

I’ve two guests today, so I’ll keep it brief. I won’t write something I’d be afraid to show my pastor.

If you enjoy science fiction movies and books, you might have noticed a tendency for writers to give a unique twist to beverages and food. Romulan ale, the famed blue alcoholic beverage from the Star Trek universe was first introduced in the original Star Trek II: Wrath of Kahn.

"Romulan ale? Why Bones, you know this is illegal."
"I only use it for medicinal purposes."
– James T. Kirk and Leonard McCoy, 2285 (Star Trek II: The Wrath of Khan)

In the prime/first reality of the Star Trek universe, Romulan ale was illegal because of a trade embargo. Later in that universe, the embargo is lifted at the Romulan-Federation Alliance during the Dominion war, and the drink is brought out as part of the celebration. It turns out most officers sampled it before it was ever legalized (wink, wink).

In the new, alternate reality of Star Trek Beyond, Romulan ale isn’t illegal and is enjoyed by Montgomery Scott at James T. Kirk’s birthday party.

Romulan ale is a perfect example of creating authentic world-building from the embargo to the illegal sampling to the use of it in the alternative universe. 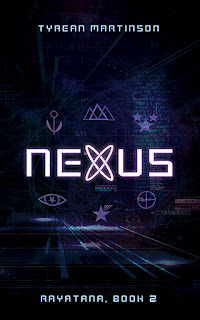 In The Rayatana Series, “awak” is like a mixture of coffee and tea with similar properties. I created awak as a YA-friendly homage to all the other science fiction beverages out there in the books and movies I love.


Nexus: The Rayatana Book 2 by Tyrean Martinson
Young Adult - Science Fiction/Adventure/Sweet Romance
Amaya is supposed to bring peace to the galaxy. Which is tough when she’s being held for crimes against the Neutral Zone. Her imprisonment is on her own ship with her own crew. But close quarters create tension.
Honestly, her role as Rayatana is a mess.
She may never get to use her powers for anything good. Not if her teacher continues to keep secrets, and not if her powers keep harming others. Putting her mother in a coma should put her in prison, but she has a mission. She wants to bring peace to her people. She needs to become the Rayatana.
Book Links: Amazon, Amazon UK, Amazon AU, Amazon CA, Smashwords, iTunes, Kobo, Goodreads, and BookBub

Friends to the End

What better way to enter October than with a ghost story?

The fictional town in Friends to the End is loosely based on stories I’d heard as a teenager. Tucked between the homes of what would otherwise be a peaceful rural road is the second most haunted cemetery in Illinois. I passed this road everyday as the bus took me to school. I’d heard the stories of apparitions floating above graves or walking down the road. And I drew inspiration from them to weave together a chilling adventure I hope will entertain children and adults alike. 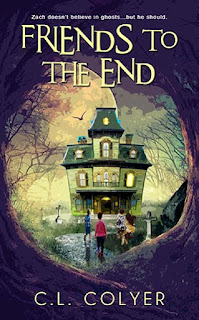 Friends to the End by CL Colver (website - blog)
Middle-grade, Ghosts, Action-Adventure
Zach doesn’t believe in ghosts…but he should.
Twelve-year-old Zach is convinced he'll never be happy without his best friend Jeremy by his side. But both of their lives changed with a bang five months ago, and as far as Zach's concerned, it's his fault Jeremy will never see his twelfth birthday.
When Zach moves with his family to a Chicago suburb, he quickly becomes friends with a group of thrill-seeking kids trying to find a disappearing haunted house. But Zach's not worried. He doesn't believe in ghosts, so he follows them into a wild, dangerous encounter that becomes a battle to decide what's real and what's not.
Buy links: Universal Buy Link, Amzon, Barnes and Noble, iTunes, Goodreads

Criminal Intent by Patsy Collins
Criminals, victims and those wrongly suspected all have a story to tell. This book contains 24 of them.
Find it on Amazon

Snowflakes and Shivers by Jemima Pett
Available October 7
Fantastic beasts leave their footprints in the snow; Christmas tree fairies reflect on their lives; snowflakes discover their destiny; raccoons save Father Christmas, and some randy space cadets have the Christmas of their dreams.
Amazon, iTunes, Barnes and Noble, Kobo, Scribed, and Smashwords

Here are the upcoming theatrical releases for October. As always, descriptions courtesy of the IMDB. Snark provided by me.

Venom: Let There be Carnage
Tom Hardy returns to the big screen as the lethal protector Venom, one of MARVEL's greatest and most complex characters.
Director: Andy Serkis
Stars: Tom Hardy, Woody Harrelson, Stephen Graham, Michelle Williams
Because there were so many pesky, unanswered questions from the first one…

No Time to Die
James Bond has left active service. His peace is short-lived when Felix Leiter, an old friend from the CIA, turns up asking for help, leading Bond onto the trail of a mysterious villain armed with dangerous new technology.
Director: Cary Joji Fukunaga
Stars: Daniel Craig, Ana de Armas, Rami Malek, Léa Seydoux
2:30 on a Tuesday might be a good time to die… 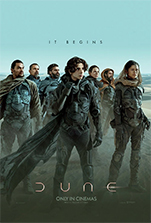 Dune
Feature adaptation of Frank Herbert's science fiction novel, about the son of a noble family entrusted with the protection of the most valuable asset and most vital element in the galaxy.
Director: Denis Villeneuve
Stars: Timothée Chalamet, Rebecca Ferguson, Zendaya, Oscar Isaac
No Lynch Weirdness? No overacting by Sting? I’m in!

RiffTrax Live – Amityville 4: The Evil Escapes
Visit RiffTrax for theater listings and tickets.
What’s scarier than an Amityville sequel? One that was made for television…

Where do you draw the line in writing? Would you try Romulan ale? An ghostly legends where you grew up? And what movie catches your fancy this month?

Be back on October 18 with movie reviews and more!