Here are some of the big movies coming out this year, most of which were delayed from last year. (Information from the IMDB.) We kick it off with a monster film I’m very excited to see after the recent trailers: 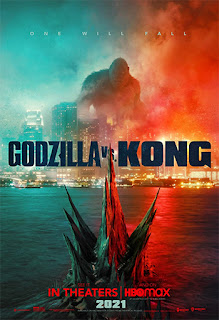 March 31
Godzilla vs. Kong
The epic next chapter in the cinematic Monsterverse pits two of the greatest icons in motion picture history against one another - the fearsome Godzilla and the mighty Kong - with humanity caught in the balance.
Director: Adam Wingard
Stars: Alexander Skarsgård, Millie Bobby Brown, Rebecca Hall, Brian Tyree Henry
Coming out on HBO Max same day. 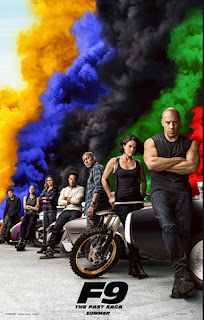 July 2
Maverick
After more than thirty years of service as one of the Navy's top aviators, Pete Mitchell is where he belongs, pushing the envelope as a courageous test pilot and dodging the advancement in rank that would ground him.
Director: Joseph Kosinski
Stars: Tom Cruise, Jennifer Connelly, Miles Teller, Jean Louisa Kelly 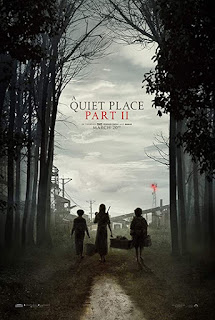 September 17
A Quiet Place Part Two
Following the events at home, the Abbott family now face the terrors of the outside world. Forced to venture into the unknown, they realize the creatures that hunt by sound are not the only threats lurking beyond the sand path.
Director: John Krasinski
Stars: Emily Blunt, Millicent Simmonds, Cillian Murphy, Noah Jupe

October 1
Dune
Feature adaptation of Frank Herbert's science fiction novel, about the son of a noble family entrusted with the protection of the most valuable asset and most vital element in the galaxy.
Director: Denis Villeneuve
Stars: Zendaya, Timothée Chalamet, Josh Brolin, Rebecca Ferguson

Monster movies! Continuing with the theme. Guess the title from the tagline and year. 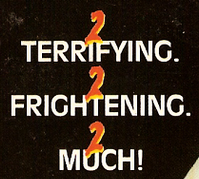 More monsters! Name the musical artist from the song title and year.

What delayed movies are you excited to see? (Yes, I will see Godzilla vs. Kong both in the theater and at home.) Know any of the movie trivia? How about the music trivia?
Next post will be March 3 for IWSG day – and I have some great news I’ve been sitting on!

Hi Alex – these will please – I look forward to A Quiet Place Part Two – sounds interesting. I await the next Bond … and excellent I await your announcement – as long as you haven’t completely squashed it flat by sitting on it?! All the best - Hilary

Wow, I didn't realize they were doing "Maverick!" Talk about a long period of time in between sequels!

I need to get back to the "danger zone" - of course, Maverick. And I love ScarJo - ready for Black Widow to kick butt. Not up on my monster trivia. My brain has been frozen mush this week - climbing back to "normal". Supposed to be 70 again today.
Can't wait for your great news....cliffhanger....

Jungle Cruise starring The Rock seems like my kinda thing.

I don’t care for the Vin Diesel flick but love to see the rest especially Bond, James Bond. I hope and pray they do not pick Gillian Murphy as the new James Bond..not even sure I spelled his name right. I don’t think I will see the monster one where they have to be silent..too scary for me. I love the original King Kong vs Godzilla film. I wonder if the 2 monster, after they obliterate Tokyo and the SAN Francisco bridge, get. Huge cup of coffee and go walk, arm in arm to a nice secluded island? I won’t attempt the music but I bet Rush will be in there, as for films...1. Alien 2. Batman Movie. 3. Underworld?? Or maybe the Wesley Snipe Vampire Film?? 4. No clue. 5. Fright Night 2 5 onwards...no idea. Looking forward to the answers.

Hilary, hopefully I haven't squished it!

Joanne, you need some thawing.

Shady, you got those!

Birgit, nice try. And believe it or not, no Rush.

It will be interesting to see what happens with Dune. It's been a lot of years since I read it, but I think it will be a challenge to do well! Might be time for a reread :)

I haven't kept up with movies at all in the last year and missed seeing Black Widow was delayed. That's about the only one I'm interested in.

So good Alex you're still able to review during these times. Some excellent choices here.

Really good news? I am looking forward to that - and smiled at Hilary's comment.

Maybe I'm just not in the right mood, but none of these sound really great to me. Hope you enjoy some of them.

The sequel to A Quiet Place actually looks interesting. I might have to actually watch that. I only got a couple of the movie trivia. Clearly I need to up my game.

I'm curious about Black Widow and Maverick, but that's about it. I'm not really a movie person, I've found.

Is the last one Tremors? That's my guess. For 4, I'd guess Gremlins. But both of those are wild guesses.

I have to say after watching Top Gun a million times growing up I am curious about Maverick. Not sure how it will be- but curious for sure. :)

Very excited to hear your good news next week! It's funny how Disney keeps making movies of their rides, but Pirates of the Carribean showed it wasn't just a joke.
I'm hoping our old-time movie theater will open again soon, so I can see some of the new movies coming out.

That graphic for Godzilla vs Kong is awesome. I'll wait til you review it, though.
Thanks, Alex.

I want to see Kong. I know a couple of the song. "Bark at the Moon" was Ozzy and "Godzilla" was Blue Oyster Cult. :)

I've been buried in editing work and have no idea what's out there. Guess I better surface. Thanks for the reviews, Alex. You make it easy for me to choose.

Hi Alex,
Stopping by to say hello! Hope all is well with you and your family. Thanks for the info and links. You always keep us informed. Much appreciated! Have a great week!

Man, I've been hearing about these movies for so long, it's hard to believe they're really on their way. Looks like we may be getting out of our house this year.

Aside from Godzilla vs Kong, I'm not too confident that most of those movies would be keeping their (current) release dates. That said, I'm also looking forward to every single of them.

I'm excited about Dune and glad they're giving two movies to tell the story. Hopefully the creators will have, you know, read the book.

Madeline, thanks for letting me know.

Liz, you got two right!

Jenni, they make one out of the tea cup ride and they've gone too far!

Ken, getting out has been limited.

Michael, the numbers have shrunk so fast already, I bet they keep their dates this time.

Donna, we can only hope!

Films have gone right out of my life since covid hit. Maybe back again this summer? Hopefully...

Have a great week.

Dune and No Time to Die will be on my list. I need to read Dune again first, though. I always like the books better than the movies.

So Many Good Movies!!! I am soo looking forward to these!!! I can only pray the theaters will reopen. Still closed here.

One of the first things I hope to do after getting the second vaccine is to go to the theater.

At last, the night has a hero – Is that Batman? I think I've heard that line, and I have watched at least one Batman film, so it seems like a reasonable guess.