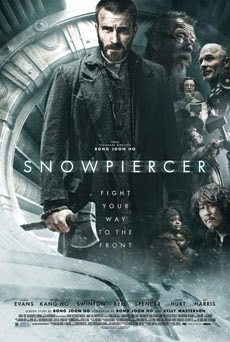 Finally caught this on Direct TV! Set in a future where a failed climate-change experiment kills all life on the planet except for a lucky few who boarded the Snowpiercer, a train that travels around the globe. Directed by Joon-ho Bong who did The Host.

This is a film where you have to buy into the really odd premise in order for it to work. (And I won’t spoil the origins of the Snowpiercer, but it makes more sense than it sounds.)

Visually it’s very impressive. It’s a quirky film, similar to a Terry Gilliam movie with bizarre, colorful characters and surreal settings. It deals with complex moral issues in its own quirky fashion.

Chris Evans is great (and far removed from his Captain America role) along with the rest of the cast.

Once the characters start moving forward on the train, trying to reach the engine, the film is full steam ahead and never lets up.

A rather pointless remake. It strips away the social parody that made the original a camp classic and replaces it with a straightforward story that is at times dull and overlong. The special effects are good and the top notch cast does a good job with what they were given. Watch only if you’re really curious.

For me, not nearly as good as all the hype. It’s very odd and quirky (which is probably the only way a movie about Legos could work) and when it’s funny, it’s really funny. It’s fairly entertaining and doesn’t overstay its welcome. Watching it once was enough though.

Huge music news – Pink Floyd will release The Endless River in October, their first studio album in twenty years. Most of this material was recorded at the same time as The Division Bell, but there will be additional work and a tour is rumored. (Considering the surviving members are around seventy years old, a tour would be impressive.)

Vanessa Morgan’s other blog, Traveling Cats, was featured in this month's issue of Your Cat.

Epic contests through Audiomachine and more – design a t-shirt or book trailer, write a steampunk series, and numerous other opportunities! Visit Samantha Redstreake Geary for details.

Glitch of a Witch by Pat Hatt

Words on Birds by Kelly Polark

The Butcher by Jennifer Hillier

And Jo Wake had a short story published in the Indie-Pendence Day Anthologies Book 1. She claims she had help and it will be her only short story ever, but I bet we can coax her into writing more, don’t you?

1 – The four Pevensie children from The Lion, the Witch, and the Wardrobe

3 – The five captains from the five Star Trek series

4 – The nine crew members of the Serenity from Firefly

Last week, Karen Jones Gowen posted about the trouble with blogging, and Denise Covey followed up with her own post.

They covered a lot of stuff and I won’t rehash any of it here. Go read their posts instead. But I will say I’ve been around long enough that I’ve seen many changes and new trends appear. (Things such as fewer people following back and more promotional stuff.)

I’d like to make adjustments to my own blog. I still want to share news and have guest posts, but fewer cover reveals and stuff like that. Get back to more of the movie-music-games-science fiction-geek stuff. As I told Denise, it’s been ages since I did any trivia. Ages!

And maybe a little more stuff about me. Perhaps even a snippet of me playing guitar. Or even small joys like the email I received yesterday from a blogger buddy that involved each of us being a blessing to the other. (Unless you don’t want more of me, especially as I’m the last thing I want to talk about!)

If you read those posts or think things are changing, chime in below with your thoughts.
Seen any of those movies and what did you think? Picking up some new books? Know any of the trivia? (Even just the first name?) And what changes have you seen in blogging or do you plan to make?

Shame the Lego movie isn't all that. I was hoping it might be pretty clever.

Peter, Susan, Edmund and Lucy are the four Pevensie kids.

I only know Kirk and Picard from the Star Trek series but I know one was a woman.

Couldn't even begin to tell you who the firefly crew are. I never got into that unfortunately.

I'd love to see and hear you playing guitar, Alex. Definitely give us more of you!

Everything changes over time and blogs are no different. I know that I've had to make changes due to unavoidable life circumstances and also conscious changes and decisions because that was what as appropriate at the time.