You know me and movies!!

Here's the rundown of some noteworthy films this month. 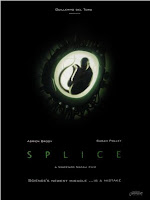 Two scientists fuse DNA samples to create a new organism: a human-chimera they name Dren. As the creature rapidly develops from a deformed female infant into winged creature, her initial bond with her creators turns deadly
THE BUZZ: From our Sundance 2010 blog: This sci-fi/thriller benefits from commitment of two strong actors, Adrien Brody and Sarah Polley. The mix of body horror and fantasy is overseen by executive producer Guillermo del Toro, and Dren, the creature created and nurtured by a pair of bio-chemists, is a definite homage to Pan's Labyrinth.

I'm seeing this movie TODAY and will post my review very soon. I am stoked to see this film.

Stars: Liam Neeson, Bradley Cooper, Sharlto Copley The
A group of Iraq War veterans looks to clear their name with the U.S. military, who suspect the four men of committing a crime for which they were framed.

Okay, I'm a big fan of the original A-Team - so I will probably NOT catch 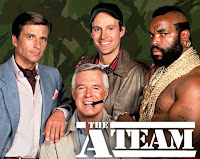 this one in the theater.
.

Just not the same without George Peppard...

Woody (Hanks), Buzz (Allen), and the rest of their toy-box friends are dumped in a day-care center after their owner, Andy, departs for college.

The U.S. military gives bounty hunter Jonah Hex (Brolin) and offer he cannot refuse: in exchange for his freedom from the warrants on his head, he's to take down a terrorist (Malkovich) who is gathering an army and preparing to unleash Hell on Earth.

This movie really intrigues me. I'll probably do a double feature that weekend.

Aang (Ringer), a young successor to a long line of Avatars, learns that he possesses the power to engage the Fire Nation and hopefully end their century-long war against the Water, Earth, and Air nations.

THE BUZZ: Regardless of the range of opinions on (1) M. Night Shyamalan's career trajectory and (2) the project's "racebending" controversy, TLAs trailers contain some of the best money shots of the year thus far

M. Night Shyamalan. I'm not holding my breath on this one. But the previews look so damn cool!

Speaking of movies - don't forget to sign up for The Movie Dirty Dozen Blogfest!

And thank you to everyone who commented on yesterday's post about my book! I'm still floating...

An interesting selection there Alex.

Have a lovely day.

Some really interesting movies coming out. Can't wait to hear your reviews. I'm looking forward to seeing The Karate Kid with my son. I remember the old movies...way back when.

Just the commercials on Splice scare me, so I won't go to it, but I probably will go see A-Team. I, too, liked the TV show so I'm hoping the movie will be good. The others I hadn't heard about before now. You are always the first to get the word out.

I love the cover on your book. That is soooo cool.

I'm hoping The Last Airebender stands up to the show, at least. It looks really good.

Can't miss Toy Story! And if The Last Airbender doesn't get rave reviews, I'm not going. M. hasn't made a good movie since Signs.

I just saw the commercial for Splice and it looks good.
I also have to see the Last Airbender. Gotta support the local guy (M. Night).
THanks!

Clarissa, let us know what they do differently with The Karate Kid.

Summer and Christine, I don't think Splice is as scary as the reviews portray. From the buzz earlier this year, there's a lot more to the movie than that.

Oh, thanks so much for this! I knew Toy Story was coming out, but hadn't paid attention to exactly when. Now I'll make plans to take my daughter this weekend.

I've already heard good things about Splice and also that it is sufficently creepy.

I think A-Team looks great so i'll check that out and Jonah Hex.

And of course i'm pee my pants excited for Aibender since i'm a HUGE huge fan of that show.
I think shyamalan will do ok with it.

My children are waiting for Toy Story 3. It is not in theater here yet.

What is the race-bending controversy in Avatar Alex? I love the show but am concerned M may ruin the property. He hasn't done much well since the Sixth Sense.

What would I do without you to make me look cool by knowing the newest releases? The A-Team? Really? Sure you didn't just throw that in as a delayed April Fool's joke?

Can't wait to see THE LAST AIRBENDER, maybe I could learn a few tricks about bending water and air? Fire was never my element.

For a minute there, I was interested in The Last Airbender -- then I found out it was an M. Night movie. No thanks! I loved Unbreakable, The 6th Sense and even The Village. But everything after that was a waste of my ticket money. I'm not getting burned again.

Strangely enough the one I'm most excited about is Toy Story 3, even though it still feels like it ought to be a kids' movie! :)

The previews I've seen for all of these look intriguing, but the movie that has me the most curious so far is Inception -- it sounds like it conforms most to my interests.

My kids are really looking forward to the Last Airbender. I saw the previews and now I'M totally stoked.

There are some really high caliber children's movies coming this summer...can't wait!.

Matthew, the reviews for Airbender are gonna have to be stunning before I go. Not sure about the controversy outside of the director himself though.

Betty, it's no joke!

Laurence, I feel the same way - that one's a wait and see the reviews.

Hampshire, there's nothing wrong with that! The best movie so far this year was How to Train Your Dragon.

Arlee, that is THE movie of the summer! Nolan is the best director in the biz.

Raquel, it's gonna be a good summer for movies!

Here lately we've been a DVD family. But I always like knowing about the new stuff.

I agree, without George Peppard, the A-Team just won't be the same...Toy Story looks kinda fun; too bad my grandson isn't a little older so I'd have an excuse to go. Have a great weekend!

I can't WAIT for Splice. The rest of them seem good too... Jonah Hex seems like it would be really fun. I wish movies weren't so frickin expensive... sigh...

Thanks for sharing, Alex!! :D

I bet you'll like Pan's Labrynth. I thought it was excellent.

I want to see Avatar so bad I can taste it!!

I have a four day weekend so I may catch Splice. I love scifi horror movies.

have a great weekend!

Toy Story is such a fun story line. Hope this is a good addition!

Miller, go before 6pm for the daytime rates...

Pan's Labyrinth was excellent - and the most depressing film I've ever seen.

By now you've probably seen a trailer for the A Team movie.

I, too, will 'fess up to being a fan of the show, especially the intricate plots...okay, so I got a kick out of the fact that you could lock them in a room with some duct tape and an old lawn mower and Mr. T could weld up a tank.

I think the trailer looks promising, so I plan to attend next weekend.

I never read Jonah Hex, but it is sort of a Western, and any film with Megan Fox in it can't be all bad (hey, if she'd old enough for Brolin, then I can admit to thinking she a hottie and not feel like a crime has been committed)

I just wanted to pop by and say thank you so much for the kind words on my blog announcement!

Thank you so much!

I am really looking forward to "The Last Airbender". Looks like Toy Story is releasing on 18th. That will be a long wait.
Great post!:)

DiscC, I've not read the Jonah Hex comics either, but it looks like a fun ride. And I guess that means I'm not too old to say Megan Fox is hot either.

Oh, I'm ALL about seeing SPLICE (tho my first thought was, "Is Adrian Brody slumming or what?" Can't wait to see what you think of it.