Continuing the A-Z Challenge from Arlee at Tossing it Out

Today is Q. Since this was such a challenging letter, I decided to make it interesting and searched for a Q in all the major entertainment areas. This post represents my findings. 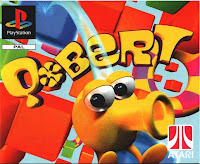 Q*Bert
Remember that cheesy, 80's arcade game? Created by Atari in 1982, it was later released for both the Nintendo and Playstation systems.

Q
How about this awful movie? Directed by Larry Cohen and starring David Carradine, Michael Moriarty, and Candy Clark, this low-budget thriller also came out in 1982. 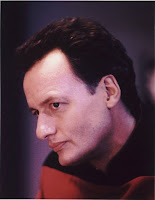 Q
If you were watching Star Trek: Next Generation in the 80's, then you remember the character Q. Played by John de Lancie, Q was an omnipotent being from the Q continuum who specialized in causing trouble for the Enterprise.

Q Fish
Yes, apparently there's even a band called Q. I couldn't find any images, but judging from the pattern, bet they formed in the 80's, too.

Oh, Q was the cutest being ever to appear in STAR TREK, his omnipotence and arrogance were amazingly entertaining, and I just loved how he used humans as puppets in his little games to kill the boredom, since he is immortal and has a lot of time in his hands. I also loved when he brought his naughty son to Captain Janeway in VOYAGER to be his babysitter :)) That one was precious.
I wish I was a Q, it's much cooler than being a Borg for example :)

Thanks for the visit,

Q was wicked, wasn't he?

You did good on finding Qs. The only one I recognized was Star Trek's Q. Maybe we only remember the good ones?

Loved Q-bert! Don't know any of the others, though. But, woot! for you on finding so many Q things.

Oh, and, I have not turned Pandora off since yesterday morning! Thanks :)

Ouch, Q is a toughie. FOrgot about that Star Trek Q. He had some real bitchen' hair.

I didn't know any of these Q's before today! Thanks for enlightening me. :)

I love Star Trek Q! I actually have John de Lancie's autographed picture and a photo of us standing together from a Dragon*Con a few years back. He's really, really tall. Of course, I'm pretty short, but still. Much taller than he seemed on TNG.

Q is hard! I still haven't figured out mine...

ooooh, i want to play qbert RIGHT NOW!
I hope it shows up on my xbox arcade

Yes I remember Q on Star Trek...Qubert is a fun albeit cheesy game to play...for kids...Hey great job on the Quirkiness of Q...My post is about Quirks...

Helen, I wish that were true! Q the movie would be gone from my head.

Summer, that is uber cool. He'd be fun to meet.

So far Q, from Star Trek is the most notable for me. I always liked his character. I miss that show lol

I'm still searching for a Q post. We shall see. In the meantime I enjoyed yours and recognized all but the band! :)

I am only familiar with TNG: Q. I was not really a big fan of his. He annoyed me more than anything.

Don't forget about Quantum Leap. I loved that show.

Here's a couple of Q's for you!

Q-bert and Q, I remember the others, not so much! Thanks for taking me back, time travel is possible, only in the mind, so far!

Very good job, very creavtive. I hadn't actually heard of any of them. I have heard of Star Trek, but have never seen an episode so I didn't know there was a guy named Q.

"...but judging from the pattern, bet they formed in the 80's, too." That made me smile. You sure found some queer stuff! :)

I wondered if someone would blog about Q from Star Trek today! He's a great character - well annoying, but he sure stirred up some action :)

I remember the movie "Q", but I don't recall if I saw it. If I remember correctly didn't it take place in Mexico City and it was based on a mythical creature of Aztec legend called Quetzocatl or something like that?

Speaking of Q games, what about Q Beez? It is a game I have on my computer that I got from Real Arcade. It is a really fun game to play. I like your Q choices.
Ruby

hat's more Qs than I could come up with. Wait, what about Q-tips? Did anyone else get that one?

Hey Alex, I added you to my blog roll. You deserve it. Keep on blogging.

Voidwalker, it was a cool show!

Mary and Kierah, I thought about Quantum Leap and Queen, but was searching for JUST the letter Q.

Jemi, that he did.

Arlee, you are correct!

Grammy, I didn't know about that game.

Thanks, Stephen! And I could've included Q-Tips, as that was also a band. Weird, huh?