What to Watch at Home, Star One – Revel in Time Fun, and CassaDark Tour Continues

The CassaDark tour continues! Today’s stop is with Deniz Bevan.

You can find CassaDark at iTunes, Amazon, Barnes and Nobel, Kobo, Scribed, and Goodreads
And would love it if you could vote for it on Goodreads’ Can’t Wait Sci-Fi Fantasy of 2022 and mark it Want to Read.

Binged-watched your favorite show already? Here are some other shows to watch. 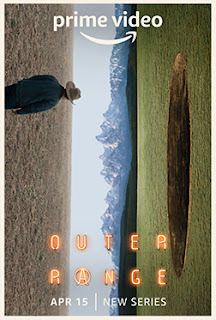 Outer Range
From the IMDB: A rancher fighting for his land and family, who discovers an unfathomable mystery at the edge of Wyoming's wilderness.
Airing on Prime, it stars Josh Brolin. It’s a science fiction, supernatural, western drama that almost defies description.
Everything seems off, but in the best and most intriguing way possible. It creates a compelling and engaging show that makes you wonder what just happened even as you crave the next episode.
Recommended. 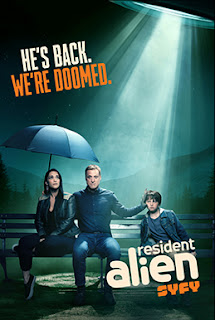 Resident Alien
Starring Alan Tudyk, Sara Tomko, and Corey Reynolds, this one is in its second season.
This is a drama-comedy-science fiction mash up with Tudyk as the alien in a human body, trying to blend while scheming plans. Tudyk is deadpan hilarious of course, but so is Reynolds, who plays the town sheriff.
If you haven’t caught this one yet, watch the first season and then dive into the second, which will wrap up soon.
Highly recommended! 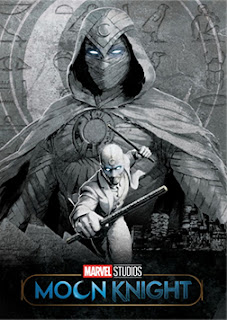 Moon Knight
From the IMDB: Steven Grant discovers he's been granted the powers of an Egyptian moon god. But he soon finds out that these newfound powers can be both a blessing and a curse to his troubled life.
Oscar Isaac (Po in the latest Star Wars films) is Marc/Steven, both the Moon Knight, powers granted to them as avatars by Khonshu. He does a great job in the dual roles. (Possibly more?)
Ethan Hawke is good as the ‘villain’ and more complex than your average villain.
It’s quirky and fun. The Egyptian mythology adds an interesting element to it. But this is not your normal Marvel superhero series.
Recommended and don’t forget your brain. 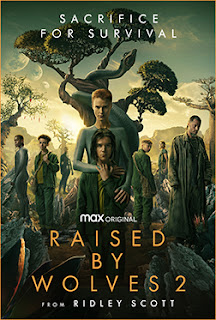 Raised by Wolves
From the IMDB: Androids are tasked with raising human children on a mysterious planet.
Produced by Ridley Scott and in its second season. After his latest “Alien” type films, that should warn you it’s going to be weird and unsettling.
This show is bat-crap crazy and not always in a good way. But don’t let it put you off that it often makes no sense whatsoever.
Recommended if you are up for the weird. 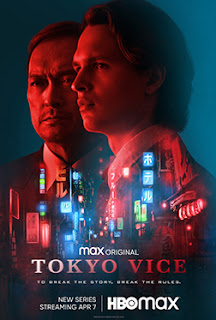 Tokyo Vice
From the IMDB: A Western journalist working for a publication in Tokyo takes on one of the city's most powerful crime bosses.
Staring Ansel Elgort and Ken Watanabe, the Michael Mann style is understated. The gritty and realistic characters are very compelling and you root for them.
Something cool about the Japan setting and the crime element adds great noir.
Recommended. 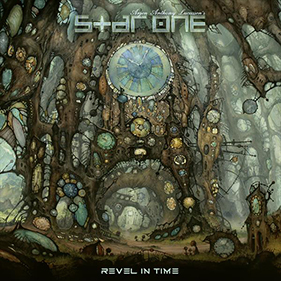 Star One: Revel in Time

The latest from Star One (and Ayrean Lucasson) features songs about time travel/loop movies. It’s fun to guess the movie from the lyrics. Last week I teased you with this song:

Oh newly arrived back in old 55
You're not even alive yet
But what have you done... mother and son
You're fading away, yeah

If you guessed Back to the Future, you are correct! (The song is called Back From the Past.)

Knowing no fear, feeling no pain
No grief, no compassion, no guilt and no shame
Built to attack, hе will be back
The fate of man liеs in his hands

Born in the ruins, a smoldering wasteland
Out of the ashes, a man will arise!
A hero at heart, a powerful soldier
Has come across time for the love of his life

This one will challenge you – it is about a time loop but definitely not a science fiction film:

He lost his aim, each day the same
He's had enough of this boring game
It's the same old song, time drags on
(There is nothing he can do about it)

Until then, enjoy the title song, Revel in Time – Bill and Ted’s Excellent Adventure.
And by the way, the skinny blonde guitarist is Lucasson – and he’s sixty-two years old!

Be sure to visit Deniz Bevan today.
See you May 4 for IWSG day!
Posted by Alex J. Cavanaugh at 4:00 AM

Love seeing you and CassaDark across the blogosphere.

I haven't watched any series in a while. Thank you for this list. I will check these out :)

I have enjoyed many films that made little or no sense and left me guessing, wondering what it was that I just saw/experienced. Such projects promote lively discussion and debate. Therefore, I'd be interested in watching Outer Range and Raised by Wolves. The Japanese noir film Tokyo Vice also looks good to me. I liked the song and vid by the Dutch prog metal supergroup Star One.

Wow, there's a lot of SF shows out there right now! Thanks for all the recs. Glad the tour is going so well!

Your book is already on my want to read list. Hope the rest of your tour goes well.

Shady, we watched another episode of Tokyo Vice last night and it's really getting good.

I assume the song is Groundhog Day.

I don't really like Moon Knight all that much, but it really feels like one of the old Marvel Netflix shows. I'd like to watch Resident Alien but I don't have Syfy and I think it's behind the paywall on Peacock if it's there at all. I might watch Outer Range since I have Amazon Prime.

I loved Resident Alien. We've got the second series recording and I'm looking forward to finding time to watch it.

Outer Range is very interesting. Weird but in a good way. I'm enjoying it. Love seeing all the publicity for CassaDark. Hope it's paying off.

I saw the Outer Range promo info, wasn't sure if it looked good. Thanks to your review, I'll give it a try.

Knight Moon totally freaked out my hubby and Father in Law. lol

I'll need my brain for "Moon Knight"? Nuts. And here I went and took it to the cleaners.

Al's comment is funny. I started Moon Knight - great cast and I will continue. Outer Range does look good. I'll put it on my for sure list. I enjoyed Great National Parks on Netflix - nice nature break.
and continued congrats on your blog tour - you are logging "on air" miles.

Not my usual type of music, but I admit to really enjoying this tune. Lucasson is an excellent drummer for Bill and Ted's Excellent Adventure's song.
Enjoy the end of your tour, Alex.
Be well and may CassaDark soar to new heights.

I haven't watched any of those but Moon Knight has been getting a lot of great reviews on Twitter.

Sounds like there's a lot of good sci-fi coming out this month! Present company included, of course.

Pat, Moon Knight is interesting although not the best effort. Better than Falcon and Winter Soldier though.

Diane, I hope so as well!

Al, don't forget to pick it up some day, you might need it.

I've been looking for some new shows. I'm almost caught up on Star Trek Discovery, and so I'm going to be needing something to watch. The first one looks interesting. But, I have to say, I saw the first couple episodes of Resident Alien, and it's not for me. I did not like it. At all.

I fell asleep halfway through the first episode of Outer Range, but I'm going to try it again. I like James Brolin. He's an actor's actor. Happy tour, Alex! Off to visit Yolanda's blog.

Already on my want to read list. Will settle down and get to the TBR and TBV items. Thanks for the list.

So excited that CassaDark is finally out! Congratulations on the fruit of all that hard work.

Outer Range sounds like my kind of show. Thanks for the recommendation!

An impressive Book Tour Alex! Wishing you much success!

I'm enjoying MoonKnight. I'll have to look into Tokyo Vice.

Have a great week.

Not heard of Outer Range, that looks very interesting.

I've been watching a lot of rom-coms. With all the boys gone, my husband has lost his voting power. Maybe I'll suggest one of the above for a change of pace for him.

I have been thinking of watching MoonKnight. For those reading comments I finished reading CassaDarK over the weekend. This book was done exceptionally well. Characters you can embrace and a plot that pulls you in deeper with each page. I highly recommend it. The series should be made into a movie. No joke, its that good!!!!!!

Joylene, try it again when you are more alert.

Truedessa, so glad you enjoyed it!

My brother and his wife love Resident Alien. I need to check it out.

While my girls will love all of your recommendations, I don't think I will even watch any of them. Good thing there are so many options out there. Something for everyone.

Congrats again on the new book.

Lots of cool choices here. I'd already planned to watch Outer Range - today, as a matter of fact ;-) Resident Alien and Tokyo Vice sound good too.

Outer Range is on my TBW list. Have a great weekend:)

I haven't seen anything new lately (outside of a movie). Summer's coming and I'll have some time then to chill out and watch a little. :)

Those lyrics are intriguing, but I have no clue, Alex. None. Zilch. Sigh.
Keep rocking the CassaDark tour!
Have a great week.

Those song lyrics have me stumped. Actually--and oddly for someone who likes to dabble in songwriting--I don't pay that much to song lyrics. None of these register with me.

Arlee Bird
Tossing It Out

I have no idea what the lyrics are from. I'll stop be to find out!

Ken Watanabe? Oh, I bet that's good.
Oh, BTW, saw "The Batman" on HBO Max this weekend. I really liked it. More of a detective story than the others (the intent, I know), it was gritty and very entertaining. I love the connection between Arkham Asylum and Bruce Wayne's mom (something I guess I should have known, but didn't).

Congrats on your new release. I really would like to see Raised by Wolves. It sounds like something a bit different. HBO max seems to have other shows I want to see as well. Now I just have to subscribe.

Loved having you on the blog, Alex!