And no, I'm not referring to the old Warrent song.

Yes, I finally saw the movie RED. Megamind's reviews continued to plummet and Due Date looked more like a NetFlix rental. 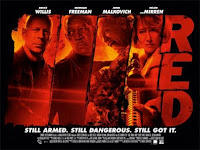 From the IMDB: When his idyllic life is threatened by a high-tech assassin, former black-ops agent Frank Moses reassembles his old team in a last ditch effort to survive.

RED is a very funny movie. The characters are great and had their own humorous lines. The gang pulls off some clever stunts, not slick and cool like in the Ocean movies, but smart and sometimes desperate tricks.

There's some great action scenes, especially one at an airport that involves Malkovich taking down a woman with a bazooka. (She called him old man!) The pacing is slower than an out-and-out action flick, though. Sometimes it's a little too slow. But overall, RED is a fun ride with a lot of laughs.

I also read an interview with Monsters writer-director-effects-film crew, Gareth Edwards. Did you know that movie was filmed for only $15,000? Edwards took a small crew on location and filmed the whole thing for $15,000. (Another $500,000 was racked up during editing and processing.) The stars often ad-libbed their own lines and were a real life couple, now married. Many of the extras didn't even know they were being filmed for a movie, which added to the realism. I am now really impressed with the movie!!

I'm still on target with NaNo. And now I must get back to screwing with Byron's life. Yeah, it's a guilty pleasure!

How's everyone else doing with NaNo? Anybody see Megamind or Due Date?
Posted by Alex J. Cavanaugh at 3:57 PM

I haven't even heard of these movies. However, in Mexico, they never label the movies in a way I can understand. Often they'll use a language called Spanish.

That being said, I finished your book today. Finally! I read so slow. It was what I expected and exactly not what I expected. So, I was wondering, do you want me to do a review of the book or something else?

I was wondering how RED would play out. I liked the premise. Given your positive review I'm likely to go and see it now.

Keep up with the good work on NaNO!

I loved REDs. I was very funny, didn't take itself to seriously, but the action was great.

I like the trend in movies where actors who have seen better days don't try to play a real serious hero role, but go for something more humorous.

i loved red was an awesome movie a new movie that i can stand to watch a few more times , new movie dont really have that much value anymore

Red and Monsters are on my list to watch!!! they both sound amazing!!

My husband went with his work buddies last night to see Due Date and said it was really funny.

I want to see Red. I'm excited by the reviews people are posting on here...

NaNo is a blast! It's been really good for me so far.

I want to see Red - the hubs went to see it a couple weeks ago (during a writer's group meeting at our house) and said it was absolutely silly, but fantastic. He says he'll watch it again with me.

On NaNo - I didn't get any wordage in yesterday but will be back at it this evening after the kids are down.

I enjoyed RED too! It had no depth at all but if you want a hysterical action film with great actors who are clearly having a ball then RED is the film to see.

That's great news that you're on target with Nano. Well done! I hope it continues to go as well.

I saw the trailer for RED in TV today. Looks cool, think I will go see it >:)

I don't get to the movies often, but I must say, RED, is definitely going to be an exception to the rule.

Thanks for that, Alex :)

I'm not participation with NaNo, but I wish you well.

Words Crafter, it's a lot of fun.

Jai, it worked as is.

I still don't know why is it called RED?

Alex - Glad you finally saw RED. The part where John M is holding that pig by the tail - I don't know - just makes me giggle everytime I think about it. The look on his face. LOL

We'll see Megamind this week when its not as crowded. Waiting to see Skyline myself. This has potential to be awesome. I really hope so.

I really want to see 'Reds' but will probably see it on-demand. I seldom go to the movies anymore.
Congrats on staying on target.

For some unknown reason I loathe Malkovich, I have no idea why, but he irritates me. Seeing Helen Mirren as a badass would be a plus if I saw this though :)

NaNo was non existent for me today, I had no time to sit down at the computer. I'll have to make up for it tomorrow. Hopefully I'll see Megamind soon, but Due Date will be a DVD movie for me.

I'll probably have to check out all of your movie suggestions on netflix.

i LOVED Red and want to go back to see it again. it made me think of Grosse Point Blank and Mr. & Mrs. Smith, but weirder.

congrats on being on target for nano. write on!

Dezz, I can't remember if that was the name of their team or the code name for the Nicaragua incident.

RaShelle, that was really funny!!

Jamie, I didn't have as much time as anticipated either. Damn, a whole Saturday wasted! And Mirren with a machine gun is worth the price of admission.

Jeffrey, I'm hanging just below the target word count, but should still be all right.

Michelle, those are excellent comparissns!

NaNo has been a bust for me this week. I've been sick. RED is definitely on my list of movies to see.

Thanks for the review!

Haven't seen it yet. I did just see The Ghost Writer and I thought it was pretty good. I'll see this though, simply based on your awesomeness and my tendency to trust people with high amounts of awesomeness.

I just saw Red today and loved it. John Malkovich was hilarious. Congrats on NaNo!

Those are both movies i want to see! Now, I will for sure! thanks...

I have never heard of these films but no doubt I will when they are released here. Good review.

I didn't find RED to be slow at all. I thought it was funny, energetic and quite clever action flick. Glad you liked it, Alex.

Liz, just do what you can and don't worry about it.

Cheeseboy, I have been told I'm Awesome Alex. Oh, and sorry about Utah.

Olivia, he was out there!

Nebular, must've missed the figure. I think the interview I read was on Blastr. Shame the movie isn't getting the same wide release as Skyline.

I've heard of both of these before; I haven't seen them, though. Thanks for the reviews!

Alex, I'm so serious. I LOVED that movie! I expected it to be good but not as good as it was. It started kind of slow before the terrorists made it to Willis' door. I loved the girl that he liked, she played her part well.

All of the actors did a great but John Malkovich (sp) has won me over. :-)

I should see this!

My son and husband really want to see Red. We haven't seen Megamind yet, but will probably take the kids during Thanksgiving break.

I'm sure I will see this one on ppv.

Kissie it's pacing was slow but the movie was great!

Thanks Julie. I have Byron in an uncomfortable spot right now!

I haven't heard of 'Red'! Sounds interesting, though.

Thanks for posting my Web Splash badge, btw! Really appreciate it. :)

You've made me want to see RED. Thanks, Alex.

Glad you thought it slow, I thought it me. Malkovich stole the show to me :)
Jules @ Trying To Get Over The Rainbow

Notes Along the Way with Mary Montague Sikes said...

Thanks for all the reviews. I never seem to find time to watch a movie. Congrats on keeping up with so much including NaNoWriMo.

I haven't been to the movies in months. Really have to fix that one day... after November :)

Really cool! I've heard good things about RED and really want to see it, and Monsters sounds like it will be something great to see.

Tallit, I'll keep plugging it as the date draws nearer.

Bryan, Red is a lot of fun and Monsters a work of art.

Oh, joy! Called grandma in and we're getting to take a night out to see RED! Just wanted to share! Looked up and saw that it was Sunday already, yikes! Where'd the weekend go?

I'm so impressed that you're hitting your daily goal so perfectly! Has anyone been looking at this guy's graph? I've almost caught up so my daily goal won't be to out of whack.

Today I sat with the family as they watched Ghostbusters for the first time and I typed on the iPad. I have to say I'm not looking forward to going back in and adding all the quotation marks after the fact, but punctuation can come later, eh?!

I really want to see RED. I haven't had time with NANo. Good to hear you are giving Byron a hard time ;)

You always come up with movies I've not heard of. Thanks for the heads up about Monsters.

I wanted to see RED and Megamind. NaNo is coming along - I unfortunately didn't get much writing done this weekend though.

Lynda, I think his heart just sank to his toes!

The movie critics here gave Red not bad rating too. Short on plot but great actions and fun. But not for me. I'm into romance.

My wife and I saw RED last week.

And I agree with you that RED is a fun ride with a lot of laughs.

RED was a lot of fun. Glad to hear you enjoyed it.

And kudos for keeping up on NaNoWriMo. Best of luck with it. :)

Now I really want to see RED! Might snag a matinee this week.

I told you before I will watch this movie, but will do so by Christmas break so I can watch it with my kids...:-)

Enid, there is a love angle to it!

Martin, let me know if you do.

I loved Red. Most fun I've had at the theater since Inception. And not just because I hadn't been to the theater in between...