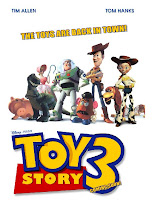 Pixar's track record is near perfect, and judging from early reviews, I assumed this movie would follow tradition. As expected, Toy Story III delivered the goods on every level.

Andy's leaving soon for college - what will happen to his toys? What does happen is another adventure as the toys embark on a journey of friendship and loyalty.

The animation is stunning. (Dare we expect anything less?) The 3D effects enhance the film, blending perfectly with Pixar's detailed animation. However, I suspect those watching in 2D lost none of the overall experience due to the quality of Pixar's work.

Outstanding scenes to watch for include the opening train sequence, Buzz in a funny re-boot sequence, and the final daycare scenario. There are some dire moments toward the end, and the ending itself is sad and touching. It will cause most adult members of the audience to recall their favorite childhood toys.

Toy Story III is sentimental and will tug at your heartstrings. This one is for all ages. Go and enjoy!
Posted by Alex J. Cavanaugh at 10:00 AM

I loved the first Toy Story but for some reason I've never got around to Toy Story 2. Guess I should!

Thanks, Alex. Hope you're having a good weekend!

I'm such a pushover, both of the previous films got my heartstrings...which is code for "made me cry, dammit."

I may even get to the cinema one day Alex. Looking forward to the Dirty 12 movies,

The first two were cute movies. This would sounds like it will be too. Enjoyed the review. Never understood why Disney has to make all of it's animated movies sad.

I must admit TOY STORY is one of those successful animated movies which has just never managed to get under my skin, but I always like innovations in animation techniques.
PIXAR is probably hoping for an Oscar which has been escaping them for a long time now.

Bryan, this one will REALLY get to you then!

Mason, this one has some really dark and sad moments.

Dez, didn't they snag one for Wall-E and Up? Or do you mean Best Picture?

Oh No. I hope I don't forget the tissues !

Can Pixar do a bad movie? For me, Card was their lowest endeavour, but even then it was pretty damn good. I'm really looking forward to seeing this one (and it's one of the rare movies that I want to watch in 3D too!).

I love Toy Story so much! I'm glad this didn't disappoint. Thanks for the positive review! I can't wait to see the movie!!!

yep, I mean the best movie Oscar. Although I'd rather give the best animated movie Oscar to HOW TO TRAIN YOUR DRAGON next year.

Gonna have to find 2 before I watch this one. It sounds great we can all use a good cry now. And then.

Oh boy, I'm so glad you like it because everyone around me wants to see it. I fear I may be dragged to a movie theatre.

There's something very special about the Toy Story series. The characters are so much fun! I'm SO glad the movie lived up to expectations. :)

Jamie, I don't think they can. And Cars was not one of my favorites. Neither was Up.

Laura, you will enjoy it!

Clarissa, just don't go screaming. (Unless you want to make a scene!)

I took my daughter to see the movie yesterday and agree. It's a wonderful movie. I started getting teary-eyed right in the beginning when they showed the home movies of Andy growing up.

The only thing I would add is that we paid extra for the 3-D version, but I don't think it was worth it. There were a few instances where it was kind of cool, but nothing like in How to Train a Dragon. Save the money and see the 2-D version--you won't be missing much.

Great review Alex. The movie touched me at so many levels, it was hard to understand. I loved Andy and Bonnie's time at the end of the show. It reflected on all emotions.

Thanks Alex, for sharing your view!
My kids loved Toy Story; it was my daughter's favorite movie. I can remember she was almost 3, when the moving truck came to our house. We went outside, leaving to do errands, while hubby assisted the move. She wanted to look under the truck. It had been awhile, since we watched Toy Story. I said, "What are you looking for?" She said, "Buzz and Woody"... I smiled from ear to ear. We packed them in our vehicle, no way were they going in the moving truck!
Maybe I will just have to take her to see it... ;-D

I love Pixar movies. So excited to take my kids to see this. But Monsters Inc. will always be my favorite!

I love this one because it's a rarely second sequel that really work. Pixar geniuses manage to continually milk inventive and funny gags at every turn, mixing them effortlessly with great heart and soul.

Andy is leaving soon... for college?!! I don't know about you but something about that line makes me feel suddenly a bit old! I love Toy Story though - such a great idea and brilliant concept. Good review! Have a fab Sunday. :)

Jaccstev, the makers of Shrek need to figure out that trick!

Oh, you already saw it? I'm sooo jealous :) I'll have to wait another week to see this. They already called "Toy Story 3" best second sequel ever! :) Good review, Alex ;)

Thanks for the review. We're going today to watch it. We're big fabs of the Toy Story movies.

Yea! Have loved the other two...glad the odds are good we'll love the #3 also.

As you know, I do not watch much TV or many movies...BUT, Toy Story I am fond of, so I look forward to seeing no:3. Thanks for the review.

My 4 year old is now a huge fan of Toy Story after watching the first one. We'll definitely go to see this soon! Thanks for the review!

I can't wait to go see it! :) I'm gonna go work on my dirty dozen right now. Thanks for the reminder. :)

Nebular, I'd say it's really close - but then, I'm partial to LOTR's Return of the King.

Carol, can't wait to see what movies you select.

Thanks for the review. Was Tom Hanks and Tim Allen in this one also?

Also, am excited about seeing your movie list tomorrow also!

I wasn't sure about this one, so I ended up taking the kids to the Karate Kid instead. Wish I'd read your review before I went! Karate Kid was good, but I think the children would have liked Toy Story, too.

We are taking the kids to this tomorrow night. Pixar rocks. They really know how to wrangle talent over there.
My husband has worked with Pixar people before and they really are some of the industry's best.
Looking forward to enjoying this!

Gregg, all the originals (that are still alive) were back.

Elizabeth, this is for ALL ages!

Jo, I'm sure he has some stories to tell, then.

Hey, thanks for the tip about the eggs, I will definitely give that a shot! I have also heard that flaxseed is a good alternative, and that sounds less expensive, but maybe I'll do a taste test or something.

Oh, thanks for the reminder about the movie blog hop too!

I've heard nothing but good things about this movie so far, I'm sure I'll still wait until it is available on DVD, but instead of rental this might be a buy.

i agree this was an excellent movie. For a bit at the end there, i didn't know how they were gonna get out of their pickle.
But yes, hilarious and touching as usual

Ginny, glad I could help with the eggs. (And everyone reading this is wondering "What the hell?")

Falen, the tension kept mounting and I had no idea how they'd escape, either!

Hugs Alex! and sincere gratitude for your blog comments and friendship. Have a great day my blog friend!

We'll probably wait for the DVD but will definitely watch this one!

I've loved all of the Toy Story movies, but this may be the best one yet. I cried a river at the end.