Don't Sit Through Another Bad Movie Without Assistance!

I considered this option the other day when I watched Mega Shark vs. Giant Octopus. I knew it'd be awful and it was actually even worse. Debbie Gibson starred and they should've let her sing. Some mall hair and crappy 80's cheese pop could have only been an improvement.

So what's the best way to get through these stinkers? With help from the genius behind Mystery Science Theater 3000, of course! 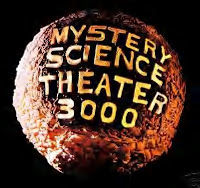 The show ran from 1988 to 1999 on Comedy Central and then the SyFy Channel. There were 198 episodes, a feature film, and it won a Peabody Award. Many of the episodes are available on DVD.

From Wikipedia:
"The series features a man and his robot sidekicks who are trapped on a space station by an evil scientist and forced to watch a selection of bad movies, initially (but not specifically limited to) science fiction B-movies. To keep sane, the man and his robots provide a running commentary on each film, making fun of its flaws and wisecracking (or "riffing") their way through each reel in the style of a movie-theater peanut gallery. Each film is presented with a superimposition of the man and robots' silhouettes along the bottom of the screen."

This was one of my favorite shows and I was disappointed when it ended. However, Mike and the guys kept going with The Film Crew, Cinematic Titanic, and RiffTrax

On RiffTrax, you can find audio tracks for hundreds of movies, good and bad! Twilight, Avatar, Harry Potter - they're all available. The concept is simple - download the audio track (ranging from free to $2.99) and sync it up with your DVD. (The guys tell you just where to begin.) Adjust the TV and RiffTrax volume, and prepare to laugh!

If you've never checked out RiffTrax or Mystery Science Theater 3000, I urge you to do so. You'll never have to endure a bad movie again!

And I checked - Mega Shark vs. Giant Octopus is available as a fan submission - RiffTrax.

Never heard of RiffTrax, but do love Mystery Science Theatre. We have a theater here in Austin called the Alamo Drafthouse that does regular movies and really crazy ones. They're the place to go for the offbeat and crazy participation stuff.

Helen, I never would've pegged you for a MST3K fan, but that's awesome! I bet that theater shows Rocky Horror and stuff like that, doesn't it?

I LOVE MST3K! I really miss them playing it on TV...

I love your reviews as it saves me from going to the cinema, you write so vividly what the movie is about.....just great.

Thanks for the visit.
Much appreciated.

Have a great day.
Yvonne,

i love MST3K, also it was produced locally so it made me love it all the more.

Wow, that sounds so cool. I can' believe I've never heard of it.

And Fallen, that's awesome you lived near the studio. Wouldn't it have been great to pop by their studio one day?

On occassion, Lana and I do a pretty good imitation of Mystery Science theater. We did it a bit for A princess of Mars on SYFY, although I can't even get her to make fun of items like Mega Piranha.

LOVED Mystery Science Theater! Good to know the concept has not died!

As I LUURVED MST3K, I'm gonna hafta check out RiffTrax. And, dude, Mega Shark vs. Giant Octopus came on, I think, SyFy a few weeks ago, and one look at Debbie (sorry "Deborah") Gibson was all it took. For me to turn it off. lol! (That, and the shark that jumped up and, yanno, bit the plane in half. Ha!)

Man this sounds awesome - filing it away for future reference.

I used to watch Mystery Science Theater back when I lived on the road and was in motel rooms a lot. Now, since I usually only watch about 2 movies a week, I try to be selective about what I watch.

That's why I love DVD. No good? Bye. But I have a friend who loves RiffTrax.

Dez, watch one - they are hilarious!

Charles, my wife and I quote MST3K often and insert jokes into every bad movie.

Zoe, when I first saw the clip of the shark biting the plane, I thought it was a joke. It couldn't be a REAL movie!

Great to see so many MSTie fans out there!

Umm, I LOVE bad movies. I haven't seen Mega Shark yet, but I've seen the previews lol and that's one I actually passed on. Two of my faves are Vampire Wars: Battle for the Universe and Garuda. Bad movies are always great for a laugh! :)

When my husband and I were newly married, in school, and totally poor...we used to have Cheesy 70's Movie date night.

We'd find something absolutely awful at Blockbuster and microwave popcorn and heckle the giant ants, deadly swamp monsters, and the like.

When we heard about MST3K we thought it was great. Nothing like a little fun with your terrible story and special effects.

Amanda, that is the joy of bad movies.

Raquel, that's great! Hey, they stink - might as well have fun.

Forced to watch bad SF B-movies for eternity - what a fate.

But some of them are just so bad they're great - Plan 9 from Outer Space has to be my favorite!!

I recently rented MST 3000 through Neflix and watched it for the first time. LMAO. What a classic. I remember waking up on Saturday mornings and watching that show. Clever concept and obviously not a lot of money needed to make the shows.

What will they think of next!

I'd never heard of Rifftrax, but sounds pretty darn cool!

Never heard of either but I do know how fun it can be to make fun of bad movies. I deliberately watch bad movies just so I can poke fun at them - particularly b grade horror and sci-fi. I just love mocking the characters as they make bad decision after bad decision.
Thanks for sharing this.

I watched Mega Shark vs. Giant Octpus last Hallowe'en as part of a god awful movie fest, and it was even more abysmal than that. I completely missed out on Mystery Science Theatre, but I love making commentry to bad movies so it's right up my street. Rifftrax sounds hilarious too, I'll definitely check it out. Thanks.

This sounds hilarious. "...forced to watch a selection of bad movies..." LOL
Great post. I should try checking these on DVD. Smiles...

How hilarious! I've got to check out RiffTrax. Sounds like a blast.

Have a great weekend!

Kate, that is a classic bad film!! And it's available on RiffTrax as well.

Comedy Channel ran that in syndication in the 90s, so I've seen a fair bit--DEFINITELY an improvement over the original movies on some of those--though I have a list of a couple that are so bad they are good again--the dubbed Godzilla movies where the voice tracking is off... the Blob... teehee

I loved MST! They were so funny & the timing was so wonderful. Between the cheesy movies & their witty remarks, I could always count on a LOT of laughs.

Hart, the Godzilla movies were the best!

Nadir, you got that right.

Thanks I will definitely check this out! Reminds me of the 70's, the neighborhood kids and I wanted to go to a movie. My Dad was sick; we read the wrong paper, it wasn't the movie we thought. There were just enough people in the theatre to run the motion picture. It was horrid, to this day, we are all bonded by this wacky experience. Remember this and that... Sounds like fun; I will check it out ;-D Thanxs~

Very interesting post! I have never heard of any of these things. But I do know I don't like a bad movie either.

The last bad movie my wife and I sat through and couldn't beleive that we did was Johnny Depp's Dillinger - that was a bust.

Have my dirty dozen all rounded up for the 21st!

Ellie, something about a bad movie with friends!

Rifftrax is new to me. I passed it onto DH, more his sort of thing. Thanks for the info Alex.

Haven't checked out either one, so thanks for the info!

I tried to host a MST3K party and it bombed horribly. Not everyone enjoys watching bad movies even with the commentary. RiffTrax are a hilarious follow-up to the show. Thanks for the heads up about this track.

Maurice, what's wrong with those people?