Movies, Music, and a Humbling Surprise

I was stunned yesterday when looking through the blogs I follow – my book was featured at The Roads of Autumn Dusk!!! Thanks so much, Rogue Evolent. That really made my day. The cover is up at Prinkipria's site as well. Guess I need to get used to that, but it's kinda humbling.

I was also stunned when I hit 100 followers on Friday! Thanks everyone. I will draw a name soon and contact the person to be featured.

Saw this over at Jo Blo’s site - JJ Abrams is up to tricks again with his mystery flick, Super 8. Scariest Thing I Ever Saw is the website for this movie and there’s speculation that a trailer will appear on May 15. He got us with Cloverfield – and now he’s doing it again!

Everybody’s getting a reboot – look for a new Godzilla flick in 2012 and a prequel to Planet of the Apes called Rise of the Apes in 2011.

Arlee at Tossing It Out is hosting a Fifteen Fantasy Island Favorites blogfest. On Monday, May 17, we’ll be talking about our fifteen favorite albums. Arlee has a signup at his blog, so join in the fun. 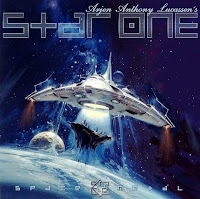 Oh, and thanks to everyone who gave their input Thursday. I now have a rough outline for the sequel to CassaStar and will begin working on it soon.
Posted by Alex J. Cavanaugh at 7:04 AM

Email ThisBlogThis!Share to TwitterShare to FacebookShare to Pinterest
Labels: Arjen A. Lucassen, JoBlo, Prinkipria, Roads of Autumn Dusk, Tossing It Out

Congrats on 100+ followers! must be damn exciting, but then again, you earned it!

Like the new layout. It is new, right? Especially the header--that's what caught my attention right away.

Congrats on 100 followers. I'm getting close too.

Mary, maybe we'll both have a 100 followers celebration next week. And the header is new - I was given permission to use it from my book cover.

You always have fun posts with great links. And congrats on the 100 followers!

The cover of the upcoming sf bestseller CASSASTAR has been displayed over at HOLLYWOOD SPY for weeks now as well :PPP

Oh, I'd forgotten about Arlee's album post. Thanks for the reminder :)

Alex, you've had a great month of April. Congrats! on your sequel. I'll certainly buy your books as soon as they're available.

Congrats on 100+ followers! Good luck on your new wip and have a great weekend. :)

Congrats on the mention and the followers! Sounds like it was a good week!

Hope your weekend is going as well.

I didn't realize they were making an Apes prequel - I always enjoyed the originals!

Lots of good news coming your way by the sounds. Thanks for keeping us updating and congrats on the 100 followers.

Thanks, Elizabeth - they just keep appearing.

Stephan, thanks - I appreciate that, dude.

Thanks so much everyone.

Jemi, you know Hollywood has no new ideas!

We can't buy the book yet can we? I intend to do so as soon as it's available. Maybe I should check Amazon to pre-order?

Amazon was no help at all! LOL ~ Maybe they know I'm broke!

Beth, the release date is October 19 - I will let you know the moment you can preorder. Thank so much.

Michele, thank you! I will need to set up a blog tour and would be honored to visit your site.

Wonderful writing & layout! My son and I love sci-fi! Glad I found your blog. I can learn so much from you!! :-) ~ Coreen

Looking forward to a fresh take on Planet. I am a huge fan of of Tim Burton, but he screwed the pooch on that one.

Congrats on a couple bits of good news. We writers live for those moments!

Also great news that you have your outline for the sequel. I've been putting a lot of energy into outlining lately, and it's tough work!

Cheeseboy - yeah, he made the apes more human than the humans. Didn't care what happened to the humans, either.

India, thanks, and it can be!

Alex, I've just put up a list of my top commentators over at HOLLYWOOD SPY (in the sidebar), and guess who's on top :)

Wild! Marko is closing in, though - let's see how long I can hang onto that top spot, Dez.

I am your 105th follower and I wish to be included in the draw, but best of all, be awarded with a book of your own work for my kids to enjoy!

It's my first time here, am I too demanding...lols!

Thanks, Amity! Hope I can keep you entertained.

It's the 1970's all over again-- they did the apes prequel movies already didn't they. And the most recent Apes movie didn't go over that well. But I've always liked all of the Apes movies to some extent.

Keep favorite albums to just 15 is not that easy. Oh what to get rid of from my list?

Wow. Fun post. I will check on those blogs sometime today!
Congrats on making it to 100 followers:)

I bet you got a thrill seeing your book mentioned elsewhere.

Congrats on both that and your 100 followers!

Glad to see you have an outline for bk2.

Arlee, I have my fifteen ready!

Thanks so much, Glynis!!