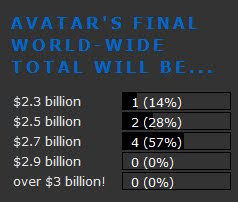 First the results of the Avatar Poll I had in my sidebar:
At the moment, Avatar is about to cross over $2.5 billion. But, will it have enough momentumn to reach $2.7?
Now on to the movie review of Year One...
Okay, have you ever been just so damned tired that you lacked the energy to turn off the TV? That's my excuse for sticking through this travesty.

Let's start with its good points:
It was better than Caveman.
Michael Cera had some really funny lines, helped by his great delivery.

Okay, now the bad:
Jack Black played an unfunny version of... Jack Black.
Jokes were of the bathroom humor variety.
Scenes were like bad SNL skits - they started with a premise and then just tapered off into nothing.
Oliver Platt was... creepy and disturbing.
Overall, a huge disappointment from director Harold Ramis.

I've seen him in several other films and Michael Cera will recover.
The rest of the crew? Not so sure.
Except #13 from House. She'll be fine.

Fortunately, I balanced that out with a good movie - Duplicity. A solid B for that one.

Next time, someone please help me reach the remote!
Posted by Alex J. Cavanaugh at 6:46 AM

Email ThisBlogThis!Share to TwitterShare to FacebookShare to Pinterest
Labels: Movies, Year One

Know when to say when, Alex!

I could barely stand to sit through the preview of that movie in the theater.

And Summer, be very, very thankful you didn't see the actual movie! What was Ramis thinking?

Gotcha. Thanks for the heads-up. And this-

i pretty much like michael cera in anything he does, so i don't know if that's points for the movie or not.

I did enjoy the Cain and Abel scene, but that may be just because i like Paul Rudd

Michael Cera's been funny in everything else I've seen. Okay, maybe not Frequency. But the movie would've been totally unwatchable without him.

I loved it, too. I'm still loving it. I'm really looking forward to a lot more movies done with freak of nature types. Wonder what the Tom Cruise-types are going to do then.

I reckon that most of those votes for 2.7 billion were mine :))

And when it comes to the other part of your post - that's the exact reason why you should keep your remote right beside you all the time :) I personally think I would've had enough strength to remove Jack Black's face from my screen even if I had been deadly tired :)

It's rare I find a Jack Black movie I can sit all the way through. There are a few out there, though. I'm glad I didn't give this one a try - thanks for taking one for the team, Alex!

Yeah, it was bad. A couple of the trailers looked pretty funny, but, not so the move. There were a couple of good spots, but, overall...forgetable.

Definitely tape your hand to that remote. Alternately, I was not that impressed with Duplicity. I found Roberts smug and unlikable. Disappointing about Platt. He doesn't make many movies, but he's usually a bright spot in the ones he does.

JD, fortunately there's not too many Tom Cruise types!

Dez, I tried! Every time I almost reached it, Michael Cera said something funny and I lost my grip...

B Miller - don't even try this one.

Galen, nice to hear someone else endured with a hopeful heart...

The trailers for that one put me off - and I've never watched it. Yay! :)

I woulda smacked that remote right out of your hand if I was there. No no no, Year One. Bad Alex!!