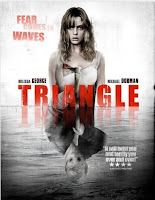 Synopsis: (From Rotten Tomatoes) Feelings of déjà vu, suspicion, and dread punctuate this psychological thriller from SEVERANCE director Christopher Smith. 30 DAYS OF NIGHT’s Melissa George stars as Jess, a woman on a yacht with a group of friends. When a storm comes up, they are forced to leave the yacht and move to a cruise ship, but there appears to be no one on board. Soon enough, Jess’s worry is revealed to be founded when someone begins killing her friends.

Based on the synopsis, I assumed that this would be a run of the mill slasher movie. But this movie was a pleasant surprise, more akin to a twilight zone episode or a well-crafted Star Trek time paradox episode, than Friday the 13th. Christopher Smith made the most out his meager budget, with interesting effects and a tightly crafted story that will leave you guessing (although I had my suspicions) throughout the running length. With the exception of a few glaring plot holes, the movie tightly weaves a bizarre story full of twists and turns. I have purposefully remained vague on the details so as not to ruin the strange journey. Not a perfect film by any stretch of the imagination, but Melissa George gives a very good performance and the movie is intriguing and thought-provoking.

Also, if you like Star Wars and parodies (and the Family Guy), I highly recommend "...Something, Something, Something, Dark Side." A sequel to Family Guy's first Star Wars parody "Blue Harvest," this movie is quite simply "The Empire Strikes Back" with Seth MacFarlane's offbeat sense of humor. With liberal references to 80's pop culture, this parody has some immense belly laughs in its short (48 minute) run time.

In the end, when Leia finally tells Han she loves him, his response literally had me rolling on the floor!

And yes, I was bit disappointed with the Oscars...
Posted by Alex J. Cavanaugh at 7:00 AM

Triangle sounds really interesting. Thanks for pointing me in a new direction!

I am sorry about your fav, Avatar. But I have to say, I saw The Hurt Locker and it deserved every Oscar it received.

Not seen Triangle, but the Star Wars spoof was hilarious!

I was disappointed, too! The Hurt Locker was good, but not great. I felt no emotional attachement to it at all and forgot most of the movie after it ended. But that's okay - James Cameron is laughing all the way to the bank! And Avatar did win all the other awards, such as the Golden Globes.

The family guy thing has been kicking around unwatched for ages. Must get to it!

Like the sound of Triangle. As far as AVATAR goes, whoever decided Hurt was better is off their frickin' rocker. Methinks some kind of jealous politics was at play somewhere.

That movie sounds really good, I'm gonna Netflix it. Thanks for the great review!

I would definitely give "Triangle" a try. I love Twilight Zone and Outer Limits, so it sounds like it's right up my alley. Thought I have to admit I thought of the movie "Ghost Ship" while I was reading your review and I remember that one being a real stinker, so I'm a little dubious.

B. Miller, what's funny is they all come from Seth!

Palin, let me know what you think of Triangle.

Marvin, Avatar was SO robbed!

Diane, I so agree.

Michele, it was good, just not THAT good.

Thanks for putting Triangle on my radar.

I must admit I've never heard of TRIANGLE, but the plot sounds more than familiar. Those horrors and thrillers set in a very limited space, can be very intriguing and spooky.

PS love the synopsis in the sidebar ;)
Is the tittle pronounced as [kasasta:] or [kazasta:]?

Triangle sounds interesting - for an afternoon maybe, so I can sleep later on :)

Don't let it keep you up all night, Jemi!

And Dez, it's an S sound - Cassa - star. Only one word.
Glad you like the synopsis!

Something Darkside is on my list of movies to rent. I heard Triangle was good and should see that by the end of the month.

Let me know what you think of both, Stephen.