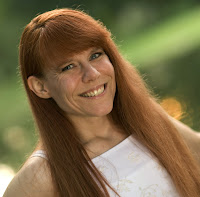 When I first found out my book would be published this year, I panicked. Ms. Wolfe was nice enough to give me some guidance, prodding me to start this blog. I've bugged her so often, the least I can do is feature her as she prepares for her next book launch. This is also my first ever interview. (So bear with me if my questions were dumb!)

You told me that you grew up reading fantasy and sci-fi. Why the fascination with those genres?

When I was younger, I read to escape. Fantasy and science fiction books provided the perfect avenue.

As I grew older, I began to appreciate what goes into such stories. It requires a vivid imagination and the ability to convey both a sense of wonder and realism. I think those who write in these genres work harder than other authors because it requires the creation of more than what already is known to us. It also entices readers to stretch their own imaginations.

Do you intend to write sci-fi or fantasy?

I don’t know if I could write a science fiction book, especially as action is not my strong suit. However, I do have an idea for my next fiction piece that would involve those genres, probably with an emphasis on urban fantasy.

Who is your favorite sci-fi author?

My first sci-fi book was The White Dragon by Anne McCaffrey, and I just fell in love with her style. Her books are very character driven and focus on relationships. Those are my favorite aspects of any story. The sci-fi element pulled me completely into another world, which was like icing on the cake. I’m hoping one day very soon they will make movies based on her Dragonrider series.

Do you have a favorite sci-fi movie then? Or fantasy movie?

I still love the original Terminator. Saw it three times in the theatre, too! Pure genius for its time. And it’s a touching love story.

As far as fantasy, I loved all three LOTR movies. But, there’s a special place in my heart for Legend. Such an incredibly visual film. I’ve seen both versions and prefer the USA one. The movie loses so much without the Tangerine Dream soundtrack. And Tim Curry was excellent as Darkness!

Do you consider yourself a geek, then?

No! Just because I used to play D&D and Call of Cthulhu and I love Star Trek and yes I’ve been to a Star Trek convention… Okay, well, I guess I AM a geek! But it’s a great quality, especially in a woman. My husband said he’d never met a girl who enjoyed sci-fi, horror, D&D, and metal before meeting me.

What do you see as the next big trend in books?

Please check out her book, which comes out next Tuesday.

The Circle of Friends, Book V...Heather
By L. Diane Wolfe

When confidence turns to frustration…

A new beginning awaits Heather Jennings. The position at Clemson means she will finally realize her dream of coaching basketball. Heather is ready to focus on her duties, using sheer force if necessary to prove her independence.

Sadly, her triumph is hampered as her father and greatest advocate lies dying of cancer. Battling her grief, she must also deal with a sister who appears incapable of responsibility or achievement. And once basketball season begins, a talented but cocky player who resembles her in every manner challenges all that remains of Heather’s patience.

Heather’s life changes when she encounters a man capable of handling her bold and feisty attitude. Straightforward and smug, he entices her to date him, and despite his gruff nature shows a great capacity for compassion. However, the last thing Heather needs is a serious relationship with a man equally fixated on work and opposed to marriage…

Known as “Spunk On A Stick,” Wolfe is a member of the National Speakers Association. “Overcoming Obstacles With SPUNK! The Keys to Leadership & Goal-Setting”, ties all of her goal-setting and leadership seminar’s information together into one complete, enthusiastic package. Her YA series, The Circle of Friends, features morally grounded, positive stories that appeal to both teens and concerned parents. Ten years associating with a motivation training system and experience as a foster parent gave her the in-depth knowledge of relationships, personality traits and success principles. Wolfe travels extensively for media interviews and speaking engagements, maintains a dozen websites & blogs, manages an online writer’s group, and contributes to several other sites.

Diane's Websites:
The Circle of Friends
Spunk on a Stick
Blog

Book Trailer:
Posted by Alex J. Cavanaugh at 6:33 AM

A really good interview. I felt kinda nervous when I did my first one, I had no clue what to ask (and my voice recorder broke the day before the interview so I had to write notes and memorise it all!).

Let's hope Diane follows through with her urban fantasy idea!

I'm with Jamie – I hope Diane does follow through with an urban fantasy novel. Whatever the genre, I'm sure it'll be great!

Nothing wrong with being a geek! Those are some great movies.

I see steampunk on the rise, too.

Great first interview Alex! I like that you thought outside the box and asked different questions.

Diane- as you know I love Legend also, but did you know that Legend is one of the few films that created everything you see on a soundstage.The forest, houses, everything were built not driven to and filmed at or worse CGI'd. Really talented people brought that to life. great choice to have as one of your faves.

Elizabeth, thank you for accepting the geek in me!

CC, yes I did! And I know the first set burned down, too. So they created that lush world not once, but twice.
And I'm such a sap - I cry every time when they find the 'dead' male unicorn in the snow...

You've been to a Star Trek convention? You don't seem the type. Do you have Star Trek pajamas? I like sci-fi but have never been to a convention of any kind. Don't plan to either. Nice blog tour you've got going on.

Thumbs up for the interview ;)

I love the idea that you're thinking of writing urban fantasy next, Diane.

LOL! Stephen, what kind of girl AM I then?
I have a Bjoran earring to prove I did go to a Star Trek convention...

Helen, after writing about reality for so long, I'm ready to venture into the unknown.

I'm jealous Diane - I want a Bajoran earring! I'm a scifi fan, but my hubby hates it - which people always think is a little bizarre. :)

Hagelrat - I'll wear it with honor!