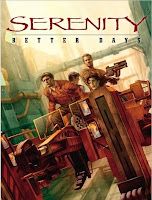 I'm a big fan of Firefly - it was one of the best damn shows on TV. Serenity wrapped things up for us, but I'll always crave more.
Serenity Vol. 2 - Better Days satisfies that urge.
The story is exactly like an episode of Firefly and takes place between the end of the series and the movie. It was an enjoyable read, hitting all the right notes.
The artwork is pretty good, but not great. A couple shots feature Photoshopped faces, which is actually taken from the back cover. But a few of the other faces don't look like the characters. Overall it worked though.
My only real complaint is the price. This graphic novel was so short, it should've been a comic book instead - and thus at least half the price.
It's also listed as young adult. Um, sure...
But for those of us who miss Firefly, this graphic novel does the trick!
Posted by Alex J. Cavanaugh at 6:51 AM

I'm not familiar with Firefly. What was the premise of the show, in a nutshell?

When you say Serenity wrapped things up, was that a show, book or movie?

I find myself really missing shows also. Sometimes they are just so good; it's as though the show itself and those who really loved it are ahead of our time, in a way. Others don't "get it" or can't follow it. (?)

Beats me but over the years there have been some excellent shows that don't make it past the first season and it just baffles me.

At least Serenity Vol. 2 satisfied that void of missing Firefly for you!

I was also a fan of FIREFLY. Together with famous ROME, it's one of those shows no one can grasp why were they canceled.
I still miss Inara :))
And the interesting thing is that it wasn't the stories in the show that made me like it, because the plots usually weren't their strong side, but the whole atmosphere, the charming cast and the underground feel to the whole series.

I must admit I didn't really like SERENITY the movie which felt too confusing, but I did like what they did to the characters in the film.

Are these original books based on the series, or are they basically plot bibles from the shows?

Seems like the writers should have beefed them up a little for the price!

Crystal, Firefly was like a western in space. The crew of the Serenity were a hodgepodge of characters who were like mercenaries (often theives!) for hire. The movie Serenity tied up the lose ends, so to speak. The graphic novels occured in between the two.

Dez, you're right, it was the characters that carried the show. I did dig the movie, though. And Inara was hot, although her role in V didn't do it for me.

Elizabeth, these graphic novels are like an episode of the show and all original.

Oh god, Firefly, i miss you so much.
I may have to snag this, next time i have money for shopping

I've only seen a couple episodes, but I really enjoyed the movie.

My son liked Firefly. This sounds like it might make a good present for his birthday, which is fast approaching.

(I love to learn about things I don't know about!)

I love the Firefly/Serenity series. I rewatch it all every summer when I'm off. Such great characters.

I'm glad the graphic novel is good, also like that it's before the movie!

Jemi, they could do a lot of these, especially as there should've been several years of episodes before it all ended. That is exciting!

Never heard of it. But appreciate the review, as always.

I'm with Dezmond. Firefly, return to me, please.